Arafat Jaradat (30), held in detention since the 18th of February, died yesterday in Israeli Megiddo prison, presumably, during an interrogation. Initially, Israel claimed he had died from a heart attack. However, after conducting the autopsy of the body, there are clear evidences such as fractures and bruises in his body that indicates he was subjected to torture. 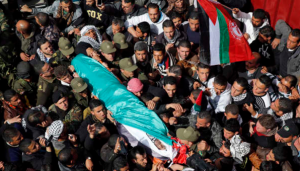 To protest his death, Palestinian prisoners in Israeli jails have participated today in a one-day hunger strike. Protest rallies have also taken place across the West Bank and Gaza.

In Hebron, clashes between Palestinian protesters and Israeli forces have occurred throughout the entire day. A vast quantity of rubber coated steel bullets and stun grenades have been shot at people as well as tear gas canisters, skunk water and live ammunition. Three protesters have been shot with live ammunition and dozens have been injured by rubber coated steel bullets, many also suffered from tear gas suffocation. 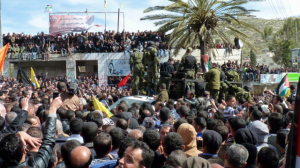 Confrontations also occurred near Huwwara Checkpoint, where Israeli forces shot multiple rounds of tear gas canisters and rubber coated steel bullets. The protest lasted for four hours, only interrupted to allow the ambulance carrying Helmi Hassan to pass through Huwwara checkpoint, where a helicopter was waiting to take him to hospital in Tel Aviv. Helmi Hassan, from Qusra, was shot by a settler yesterday with live ammunition, which narrowly missed his heart.